Written by diana on July 16, 2018. Posted in Television reviews. 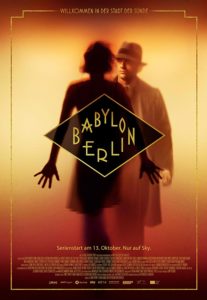 Adapted from the best-selling detective novels by the German author Volker Kutscher, the highly praised Babylon Berlin begins less than ten years after the Treaty of Versailles. Germany is in turmoil. (Adolf Hitler and the Nazi Party would come to power in 1933.) Set in the golden ’20s (1926-1929), Berlin is not so golden for everyone. The Nazi takeover is still a couple of years in the future, but the general turmoil is already evident.

Babylon Berlin is part period drama, part police procedural, and part mystery thriller, but there is always an undercurrent of intense foreboding, drawing on our 100 percent hindsight of what’s to come. Hitler’s name is heard only once and Brown Shirts first appear in one of the last scenes. The era’s troubled Zeitgeist is well-known to viewers but not to the players in this underworld of politics.

Suffering from “shell shock” and addicted to morphine, police detective Gereon Roth (Volker Bruch), arrives in Berlin and connects with Lotte Ritter (Liv Lisa Fries), a police department typist, nightclub entertainer and part-time prostitute. She aspires to being the first female homicide detective, eager to escape the hardships of poverty and her brutal family life. Lotte manages to become a heroine despite the sexism and corruption of the police force.

Gereon and Lotte soon discover conspiracies and intrigue: hijacked freight trains, smuggled munitions, sex trafficking, police partnering with organized crime, Soviet collusion, Communist (Trotsky) revolutionaries, drug deals, and élite corporate magnates invested in maintaining their grip on the economy. Throughout, we see Berlin as a swamp of contrasts: elegant Berliners fill a debaucherous cabaret as rampant poverty persists in nearby neighborhoods; outright bigotry and violence occur daily and secretly; and ordinary Berliners cling either to a tenuous status quo or to dreams of revolution.

From economy to culture, everything is in the grip of radical change. Speculation and inflation are already tearing away at the foundations of the still young Weimar Republic. Growing poverty and unemployment stand in stark contrast to the excesses and indulgence of the city’s night life for the privileged and well-connected.

Weimar Democracy was under attack both from the Communist Left, as well as by traditional Conservatives, in a kind of unholy alliance. The Nazis did not just arise from nowhere. They were citizens who reacted to Germany’s economic conditions and wanted radical change. Both the government and the wealthy in Germany and Russia use this populism to serve their own dreams of domination.

Politically and economically, the nation was struggling with the terms and reparations imposed by the Treaty of Versailles (1919) that ended World War I.  Punishing levels of inflation ensued.

The parallels with today are particularly disturbing. Could this backstory of what happened in Germany in the 1930s and the years immediately preceding the rise and stranglehold of Nazism foreshadow America today? And of course, we naturally speculate how easy it is for an anxious public to succumb to a demagogue.

Note:    This Netflix Original series is in German and subtitled.