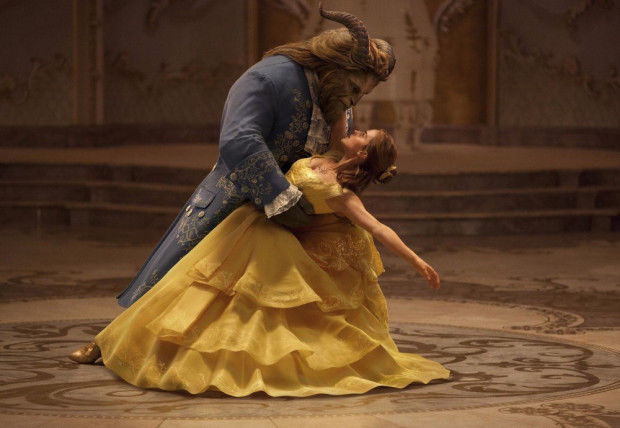 In this 2017 live action remake from the 1991 animated film, both by Walt Disney Pictures, we see the familiar and delightful eighteenth-century fairy tale by Jeanne-Marie Leprince de Beaumont.   Beauty and the Beast grossed over $1.2 billion worldwide, making it the highest grossing film of 2017 and the 10th highest-grossing film of all time.

The cast for this “tale as old as time” is a dream one:  Emma Watson (“Hermione” from the Harry Potter films), Dan Stevens (“Downton Abbey”), the outstanding veterans Kevin Kline, Ewan McGregor, Stanley Tucci, Ian McKellen and Emma Thompson and the luminous voice and talent of Audra McDonald.

Of all the new additions to this version of Beauty and the Beast, Emma Watson as Belle gives a winning performance as the intelligent, strong-willed, book-loving beauty, and has a surprisingly charming clear singing voice.  The Beast is so camouflaged, it is a shock when he is revealed as Dan Stevens after the curse is lifted.  (Liam Neeson would have been expected instead.)  And the other animated characters (a singing candelabra, tea pot, clock, clattering armoire, and a harpsichord) are humorous to behold as they appear as Ewan McGregor, Emma Thompson, Ian McKellan, Audra McDonald and Stanley Tucci respectively.

Beauty and the Beast is sheer enchantment with exquisite costumes, a few new songs, visuals and cinematography to support the  outstanding ensemble cast. Seeing the “Be Our Guest” musical scene in the large dining room has almost inconceivable CGI effects. How did they produce the details so seamlessly?  They are flat-out amazing and impeccably match the animated version with dancing candelabra, feathers, dishes, and a kaleidoscopic collage of all elements from the dinner table.

For the integration  of animated and live action scenes, this is a must for film buffs.

Note:  The realistic scenes of battle and mob psychology may be too frightening for those under eight years old, depending upon the child.  For adults, the disturbing mob will seem unsettling and unfortunately all too familiar.