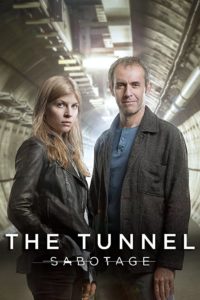 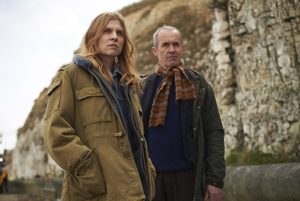 This British-French bilingual thriller is a PBS television series, adapted from the 2011 Danish/Swedish crime series “The Bridge” [also remade as a 2013 American Fox series with a Mexican/American police team]. Hans Rosenfeldt, the original creator, develops this British-French version, renamed “The Tunnel”,  as well.

“The Tunnel” stars Stephen Dillane (of “Game of Thrones” fame) as British policeman Karl Roebuck and Clémence Poésy (from “Harry Potter and the Deathly Hallows”) as French policewoman Elise Wassermann. The mismatched detectives must work together to find a killer who has left the upper-half of a woman politician’s  body on the French side of the Channel Tunnel and the lower-half of another woman’s body on the UK side.

The murderer soon is revealed as a serial killer –nicknamed “TT” for “Truth Terrorist”– who is on a moral crusade. TT’s mission is to wreak vengeance for social injustices: particularly, the abolition of rights for immigrants and the poor, institutional mistreatment of the elderly, warehousing the mentally ill, jailing protesters rioting against government policies, and exploiting children. The “Truth Terrorist” revels maniacally in his own moral superiority. Forcing Roebuck and Wasserman into an uneasy partnership, the series of crimes involves ever more ingenious and horrific methods to underscore the moral bankruptcy of modern society.

“The Tunnel”, however, is more than a dramatic police thriller about fighting crime. The dualities of culture and personality, people divided by politics and history, are fascinating to watch for their layers of complexity. The uneasy chemistry between Roebuck and Wasserman are a metaphor for the cultural gap and ideological boundaries separating all of us: the powerful from the powerless, and the self-interest and turf-war conflicts between nations. “The Tunnel” is novelistic storytelling at its best!