Written by diana on December 2, 2013. Posted in Television reviews. 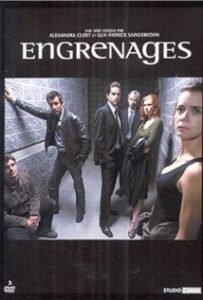 Internet streaming and cable/satellite TV have opened the door to some superb international films and television series formerly nearly unknown to the average American viewer.  Think “Borgen”.  It’s not just Denmark, however.  “Spiral” (the English translation of the  French crime series) has been a blockbuster hit not only in France but also throughout Europe (resulting in BBC co-producing for the international market.) As of last month “Spiral” has now found a devout American following through distribution by Netflix, which offers all forty episodes in four seasons (starting production date 2005) .  Season Five will be available in January 2014 and season Six is under contract.  In addition, an English adaptation of “Engrenages” is in development.

“Spiral” is “The Wire” on steroids, with “Homeland” thrown into the mix in Season Four. This police drama centers on the competing strategies of a policewoman and her two lieutenants, as well as a primary judge, a prosecutor and a lawyer. But “Law and Order” this is not.  A sometimes over-the-top violent depiction of the crime (far different from “American” style depiction of corpses), with very little forensic CSI-style technology, “Spiral” captures what real-life criminal police work must be like in Paris.  Similar in this respect to “The Wire”, the gritty, incompetent but far-too-human police officers pursue the culprit, resisted at every turn by  political corruption.  Each season follows the characters as they investigate a central murder case and unveil malfeasance at the highest levels.

Like “The Killing” (also an American adaptation of a foreign television series), the maniacally dedicated heroine, homicide detective Laure Berthaud (the magnificent stage actress Caroline Proust), has no social life and almost no social skills. There is no glamour to the job and Lieutenant Berthaud is far from glamorous.  Her main antagonist, however, is: the beautiful attorney Josephine Karlsson (played superbly by Audrey Fleurot), who seems to embody evil, but in an extremely complex way. You simply cannot take your eyes off her because she is  hypnotically sinister, cynical,  and coldblooded. She is also vulnerable. The investigating magistrate, Judge Roban (played by Philippe Duclos), the brilliant and highly principled outsider, sometimes dominates the story and  mesmerizes as we watch him choose between two equally devastating  decisions, almost inevitably intensifying the personal dilemma for himself.

The main investigating prosecutor (Gregory Fitoussi) is a handsome lawyer who often seems exasperatingly clueless but is essential to the story’s forward movement.  In addition, a cast of  riveting supporting characters who comprise the  police force, judicial office, and local government as well as the highly original portrayals of psychopaths  are no less spellbinding with their unexpected tactics.

What is so remarkable about this series is the extraordinary storytelling: vivid narrative arcs surprising the viewer at every turn.  Overlaid upon a superb story, full of suspense with a labyrinth of clues, are both the unfamiliar French judicial system and the cultural differences in the depiction of physical combat and sexuality.  This contrast in cultures contributed to my fascination with “Spiral”.

The subtext appears to be  all rules exist to be broken, or at least bent, and so the wheels of justice spiral in a highly charged vortex where the outcome is never predictable.  “Spiral”, available only on Netflix, is a must-see!