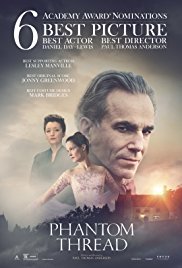 In an early scene of writer / director Paul Thomas Anderson’s Academy-Award nominated Phantom Thread,  Reynolds Woodcock (Daniel Day-Lewis) gazes across the dinner table at Alma (Vicky Krieps) who he hopes will be his next easy conquest. After all, he’s the renowned haute couture dressmaker in 1950s London who clothes royalty and celebrities. She’s just a waitress he picked up earlier in the day. She returns his look with her own dark-eyed steady gaze: “If this is a staring match, you’re going to lose.” And so it begins – a contest of wills and loves, desires and needs, beauty and death.

Alma, from the Latin meaning “nurturing, soul,” enters Reynolds Woodcock’s aesthetic hyper-sensitive world as a life-force determined to break through his hardened upper crust nonchalance. She will have him love her as she wants to be loved, as she knows he needs both to love and be loved.

Closely guarded by his sister / business manager Cyril (Lesley Manville), who’s wary of Alma’s effect on Reynolds, Reynolds flits around Alma, first as his principal model and then lover and inspiration, as a hummingbird, darting in and out. His self-protective indifference provokes and challenges Alma, wanting to become closer to her but driving her to her own obsessive acts.

As this courtship dance goes on, we feast on a visual banquet of couturier 1950s dresses, in deliciously colored fabrics, worthy of a young princess appearing at her favorite charity’s annual gala. You can almost hear silk swish as models walk the runway displaying Woodcock’s artistry.

Can there be any doubt what the “phantom thread” is?