“Colette”–A Woman Ahead of Her Time 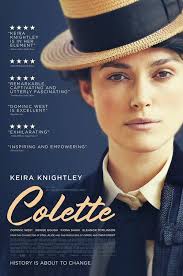 “Colette,” opens in the countryside of rural France as we meet the young Sidonie-Gabrielle Colette (Keira Knightley) at home in Burgundy. In short order, a successful Parisian writer known as “Willy” (Dominic West) pays a visit to Saint-Saveur-en-Puisaye, and before long he and Sidonie are enjoying an energetic romp in the hayloft. Soon after, Sidonie (destined to be known simply as ‘Colette’) is installed as his wife in Paris.

But when Willy begins having problems with creditors, he convinces her to write a novel under his name. In fact, he locks her in a room! “Write!” he bellows. So she pens a story about a sassy country girl, “Claudine,” which becomes a literary sensation. Willy wants yet another novel from her and another. And so it goes. She will not write a book under her own name until she breaks with Willy, a wily philanderer, in 1906.

In fin de siècle Paris, Colette will go from enabling wife to the grand-mere of feminist literature and a bisexual adventuress. In this beautifully filmed biographical drama, you can track her transformation by her clothing—from the yellow country dress to the mannish suits. When her husband buys her an expensive Parisian gown— at a time when society ladies were dripping in jewels and wearing extravagant designs— she wants no part of it. Indeed, her idol was Amantine Lucile Aurore Dupin, who wrote under the pen name George Sand and preferred wearing men’s clothing. 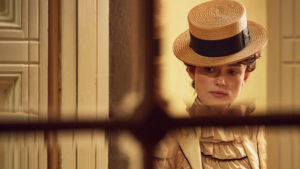 Colette’s self-confidence changed a country girl into a fashion icon, the most photographed woman of her time. Doing so, according to the director Wash Westmoreland, at a time when a woman could have been arrested in Paris for wearing men’s clothing.

The film is a joy! Oscar-whispers are circulating for Kiera Knightley.