Regardless of your political tastes, the documentary RBG offers an insightful peek into the life and work of a lifelong advocate for equal rights for women and minorities.

As one of three female Supreme Court justices serving on the nine-judge bench, Ruth Bader Ginsburg has become a cultural icon and something of a “fan-girl” sensation. We are entertained by the T-shirts and costumes depicting RBG as a superhero. Early in her career as counsel for the American Civil Liberties Union, Ginsburg argued more than 300 gender discrimination cases, including six in front of the SCOTUS, five of which she won. 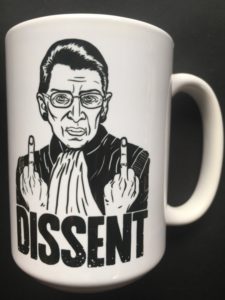 The inspiring story of the 85-year-old Ruth Bader Ginsburg, a diminutive and shy but formidable  judicial powerhouse, begins with her upbringing in Brooklyn, the daughter of Russian Jewish parents. Personal interviews with Ginsburg’s childhood friends, family members, colleagues and young millennial fans reveal her impact on US law, as well as her contribution to social change.

RBG can’t contain its love for this remarkable legal mind. And rather surprisingly, this documentary is a valentine not only to RBG but also to her supremely proud and supportive husband, Martin–and their love story is very moving and poignant. Meeting at Harvard Law School, the young couple married and carried each other through school, sickness, and parenthood from 1956 until his death in 2010. (Martin was considered one of the top tax attorneys in the country and an endowed chair at Georgetown Law School bears his name.) 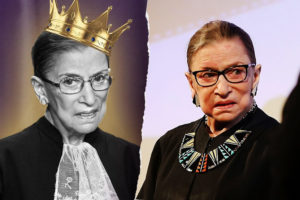 After her husband’s death RBG has taken on even a more courageous, energetic stand in the Supreme Court and was given the moniker Notorious RBG after the rapper Notorious B.I.G. for her feisty style of resistance. Author and activist Gloria Steinem at one point describes Ginsburg as the “closest thing to a superhero I know.”

What ultimately emerges in RBG is a touching portrait of a brilliant Supreme Court justice– described as shy and retiring but with “a quiet magnetism”– a work horse and a master legal strategist in the tiniest and most unassuming of figures. A force of nature, RBG is a glorious homage of truth to power today.