Written by diana on July 10, 2018. Posted in Television reviews. 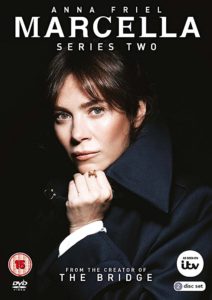 Promoted as a Scandinavian noir detective series on the streets of Britain, Marcella is written and directed and produced by Swedish screenwriter Hans Rosenfeldt, creator of The Bridge. Two seasons on Netflix, Marcella  delves into the psychology of a deeply troubled London detective.

In Season One Marcella Backland (Anna Friel) investigates a cold case involving a serial killer who appears to have become active again. At the same time Marcella also has to deal with her disintegrating personal life, where her husband, Jason (Nicholas Pinnock), has made the decision to leave her and take their two children into his custody. In addition, her soon-to-be ex-husband is suspected of being involved with the murder of his former girlfriend, Grace. Due to traumatic blackouts Marcella cannot recall her own confrontation with Grace.

In Season Two Marcella investigates a pedophile, who has victimized and murdered her young son’s best friend and other young boys and girls. The suspects include an arrogant millionaire, a 1970s rock star with dementia, and his talent agent. Her estranged feckless husband has become engaged to a nurse, putting their children in the middle of an ugly custody battle. Marcella’s blackouts continue, and she seeks counseling to help her remember –under hypnosis–what happens.

Both seasons of Marcella delve into the psychology of a deeply troubled and flawed character, whom some viewers will find difficult to empathize with. Tortured and battling her own demons while trying to solve some of the most gruesome crimes on the streets of London, Marcella is challenged by doubt and “impostor syndrome”, not believing in her own capabilities to discover the murderers.

In the final episode of Season Two we see Marcella end her denial, admit she is not well, and descend into an abyss. We are waiting to see how she claws her way out in the projected Season Three.

In 2017, Friel was awarded the International Emmy Award for Best Actress. The structure of the narratives in Marcella are so complex that a second viewing is recommended. Could the narratives have been clearer? Yes, but still not so convoluted as to pass on this one. Not as riveting as The Bridge in several of its versions, but nonetheless highly original and psychologically riveting.